The last Saturday, the 30 of may, 6we met 6 players in Ortuella (Basque Country) to play to ring tennis. Now that we are getting out of this crisis and we can get together, we went to a park in Ortuella, a small town in Bizkaia, to play two good games of ring tennis. It was a spectacular day, sun, and heat; it seemed summer. A very appropriate day to take off your shirt and sweat a little with the yellow ring. Since we were 3 couples, we played a single semifinal and the final was played by the winners against Felipe and Fabio who were waiting for the final. In the final Fabio and Felipe were the strongest, Ander also played with them in a good part of the match.

We had a great time and it was a good experience after so many days of confinement. In July or August, we will meet again and in October we will play the Basque ring tennis tournament (individual). These were the results of the Ortuella tournament. 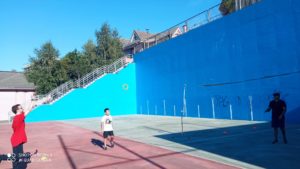