On the last 27th of May, the Basque Association of Beach Tennis and Minority Sports organized the I. Elorrieta Tournament of Ring Tennis in the area of Elorrieta, Bilbao. We met 8 players and we made 4 balanced couples. We start playing at 6:30 and at 7:30 we finished it. We played all against all.

The tournament was balanced, and we played 6 intense games at 15 points each game. 3 new players came, and they really liked the sport. Jan Dabi after 6 years returned to play Ring Tennis and was willing to return and even attend the World Championship next year with the Basque team.

Finally, the couple formed by Egoitz and Darlyn was the strongest and won the tournament, although it is worth mentioning Maria, Alexis, and Jesus, the new players who did very well.

Our idea is to organize the Basque Couples Tournament in August or October and continue entering the 2023 World Championship so that we hope to be able to participate as the Basque Country.

Here we leave you the results: 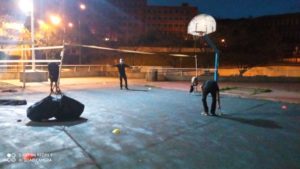